This is the weekend we celebrate Thanksgiving in Canada.  Officially, it's the Second Sunday in October, followed by the Second Monday. Some of us feast on the one; some, on the other.  It is a quieter celebration than that of our Neighbours to the South (i.e., the USA)...because, in large part, it is born of a different tradition: thanks for the harvest, but not thanks for liberation from the rule of the British Crown! :-)

So...we gather as families and indulge -- as do our American friends -- but being that much farther north, our harvest is earlier.  Being a Christian in the Anglican Tradition, I will be celebrating at St. Cyprian's, Lacombe, on Sunday morning.

As well, the Thanksgiving Weekend marks, for most Canadian gardeners, the END of the growing season, when everything is cleared out, put away, harvested and tidied up...in anticipation of...well...you know.... 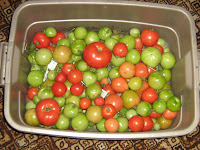 Most of my garden these days is perennial; however,  have carved out a modest veggie patch to the east of my garage.  This year my bumper crop was tomatoes -- as you can see from the Rubber  Maid tub-ful I've collected.   (Note: this doesn't count the dozen or more that I've already given away!)

Then there are family gatherings to consider.  In Canada, this holiday, quite frankly, takes a back seat to Christmas.  My son will be working and unable to join us.


This year, my daughter and I will be gathering tomorrow -- a day early -- at my sister's cottage to help her clear away her garden -- tomatoes, carrots, beets...maybe even some onions, zucchini and even more tomatoes... 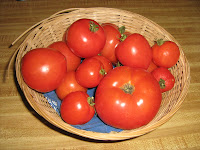 The contents of the tub are covered with newspaper; other, riper examples have been transferred to a basket in my kitchen to be made into salads, like this one, or to be used in sandwiiches (my Bread of the Week is Dark Rye).  (Note: I am pondering an art quilt from this photo...it's just too irresistible!)


In our current culture, Canada's Thanksgiving Holiday coincides as much with the World Series as it does with the beginning of the  NHL (Hockey) season and the football (CFL) play-offs.  Regardless of the sport, the TV Powers have managed to devise ways to entertain our men-folk so that they will fall asleep en mass in front of the nearest television not long after a many-course Thanksgiving meal.  :-)

Being three women together this year, we won't notice this much, but that doesn't mean we won't be getting somewhat soporific after a wonderful repast...

Counting our blessings: the happy juxtaposition of our relationships, the ability to appreciate generational differences, to delight in generational similarities, and to know that, above all, we love each other and are loved by the Greatest Love of all.

And when you find yourself in the place just right,
'Twill be in the Valley of Love and Delight!"

Happy Thanksgiving, Margaret! So glad you are part of my life.

Your tomato harvest is beautiful! Happy Thanksgiving, Margaret! Like Judy, I am thankful you are in my life.