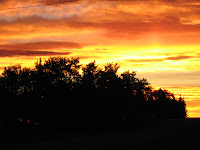 Autumn has been beautiful here this year, the colours so striking and so plentiful that I've found myself running for my camera more often than ever before. 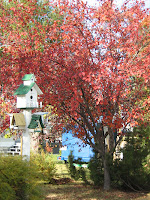 As the days grow shorter, I've been up early enough to witness spectacular September sunrises, and with the recent spate of warmer afternoons, have found myself hauling out a lawn chair to sit, stitch and stare at the beauty all around me.

This week I finally managed to finish the Pacific Rim Sampler, designed by my dear friend, Jeannette Douglas, and destined for my BIL and his wife, who live out on Vancouver Island.  It was another of my collection of UnFinished Objects, intended as a 25th wedding anniversary gift, but reaching them in time for their 27th, at the end of December this year.


Compared to knitting and quilting, embroidery is my slowest skill -- not because I haven't been doing it very long (I learned to embroider around age 9 or 10), but because in recent years I have turned from pictures in cross-stitch to "line samplers" in a variety of stitches, on 28- or 32-count linen rather than 10- or 14-count aida cloth.  I have to have very good light for this work, and a magnifying glass -- and sometimes I just take off my specs and peer at the stuff! 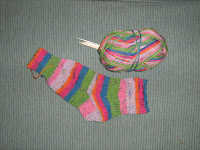 I've taken knitting with me on long walks over the gravel roads that ring my wee hamlet, surrounded on either side by my beloved golden aspen.  Thus the first of the pair of pedicure socks (a commission for a friend of my daughter's) has been finished... 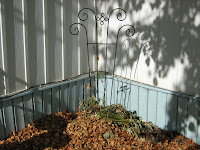 The temps are dropping steadily overnight, though, and I knew that this week, the time had come to put the flower beds...um...to bed, which I do simply by raking leaves over them as mulch.  Here's a shot of a corner spot, under the eaves and facing south-southeast.

The little trellis marks the site of one of the roses my neighbour D gave me this spring. 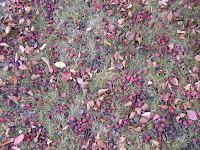 There are three in all -- the other two being hardy red bush roses.  This one has much tinier leaves, tends to climbing, and produces very sweet little yellow blossoms.

At the same time, my ornamental fruit trees have outdone themselves this year, so portions of my back and front yards are covered with thumbnail-sized apples which I tried not to disturb.  I have a sneaking suspicion, though, that the Cedar Wax-Wing party might not happen till spring, after the fruit has been frozen under the snow-pack, and has reached just the right stage of over-ripe fermentation...
Posted by Margaret at 6:57 am

Oh the colors have been SUPER! Love your photos! : ) by the way... if you use them as inspiration for your art, give them a little pop in the contrast first. I do that all the time and it it really brings out the way I feel when I'm snapping the colorful photos. : ) Yellows are brighter, reds are deeper and the blue becomes truer.
Love the red leaves : )
~Monika