Today we remember mothers.  As mine died in 2004, and my mother-in-law in 2006, it's a bittersweet day for me.  Sweet because I have two great children who, even as adults, take time to remember me and send their love and good wishes for the day.  Bitter because I miss my great Mom -- miss having her to share things with, to chew over the problems and challenges of daily life, to pray with, to laugh with, to enjoy a favourite lunch of Wild Mushroom Soup, foccacia bread and red wine after church...

So I thought I'd dig back through my family tree a bit in remembrance of my mother, her mother and her mother: my Maternal Line.  The first photo (above left) was of my mother's father's mother, aka my Great-Grandma Davison, aka "The Mater".  Deserted by her husband, James, she was apparently a formidable soul who brought up her two boys single-handedly (though I have no idea how).  Here she's shown with her sons; Walter, on the right, was my mother's father, aka my Grandpa Davison.  He died when Mom was in her early teens, so I never knew him.

In 1910, Walter became engaged to Margaret Gibb, the young woman you see at the right -- my maternal Grandma Davison -- and they married in September, 1912.  I don't remember much about her either, as she died when I was three, but Mom told me I used to spend quite a bit of time in her room, on her bed, with her teaching me my colours.  Margaret was a lively young woman, born sixth, I believe, in a family of seven children -- four boys and three girls.  When my dear H and I were engaged, I was given her diamond solitaire for my engagement ring, and her wedding band -- a wide one -- for H's wedding band, which I treasure. 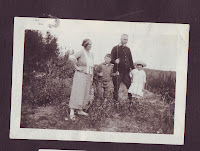 Grandma and Grandpa used to take their young family for summer holidays in the Laurentians in Quebec, near Lachute.  Favourite pastimes included boating, swimming and fishing.  Here, my late Uncle Bill Davison is ready go fishing with his dad.  Presumably my mother, Margaret Ruth (known as Ruth) was going to be otherwise occupied!

My mother grew up to marry her junior high science teacher, John Rennie, who died in February 1952, just a few months before I was born.  Mothering both me and her own mother kept her busy, but she enjoyed holidays away at the beach with me in the summer.  Here we are enjoying the sand and surf in Maine, a relatively easy drive across the border from Quebec.

Sometimes my godmother, and Mom's first cousin, Georgina (Aka "Nina", daughter of Fred Davison and grand-daughter of The Mater) came with us.  When Fred's wife, Olive, died, Nina was only three.  Hopeless in caring for her and her older sister, Stella, Fred turned to family, and Georgina came to live with my mother as an 8-years-younger sister.

When I was studying at McGill University in Montreal (1969-1974), Nina became a second mother to me, as mine lived 50 miles away, and had taken to spending part of each winter in Florida.  She even met my husband-to-be before Mom did, and gave her 'two thumbs up!' in approval.

Many years later it was my time to mother my mother.  It's something that happens to many of us if we're lucky, and it is indeed a mixed blessing, being both daughter and 'mother' to the woman who gave me life, and lovingly nurtured and advised and cajolled and encouraged and cautioned me from the moment I arrived on the planet.

In the photo at right, which I'm using as my Facebook 'Profile Pic' today, we are gearing up for a mid-afternoon dessert of pie and ice cream at a wonderful rustic restaurant in a little town near Calgary.   Nina was with us again to share in the fun.

To the women of my Maternal Line on this Mother's Day, I'll sum up my thoughts this way:

If I had a single flower for every time I think about you, I could walk forever in my garden.  ~Attributed to Claudia Ghandi