As I mentioned in my last post, I've been working in my City & Guilds course over the past two or three days; my progress since early January is now recorded under the Polishing the Process tab.  Drop by and take a look! 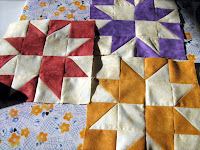 Some months ago, my friend W gave me a box of squares, strips and half-square triangles she'd assembled to make into a quilt called "Sunrise, Sunset", designed by Joy Hoffman and included in the December 2002 issue of Better Homes & Gardens American Patchwork & Quilting.  When she gave me the blocks, W said she was no longer interested in assembling the quilt top, and that I could keep the magazine.  I'm delighted, because it has some very pretty patterns in it.  Even though I don't make many traditional pieces now, I still find looking at them and reading about them a restful way to spend time between projects.  This quilt is no exception.  In the past week I've turned to the box of pieces to bring some order to the psychological chaos created by getting 4 entries off in the 2 months since Christmas.  I've begun to assemble the star blocks, which W chose to create in 3 different colourways -- purple/cream; red/cream; and gold-orange/cream.  (The pattern had a 4th -- in a fuschia/cream combo.)  I've decided I will take time to make these blocks whenever I need to turn to the orderly and the methodical over the next few months.  When the top is assembled, I'll return it to W; she can find someone to quilt it, and then do what she likes with it -- likely give it away....unless, of course, I fall in love with it in the meantime...

My newest art quilt project is a series I've been pondering for well over a year.  I took the photos for it last spring/summer, and have been mulling over various interpretations.   It's based on abandoned buildings 'round about where I live.  The first piece, "Watching", shown here in the pinned stage, is almost completely stitched now.   The bit of roof you see at the top is a slice from the body of a sweater I found at the thrift store in Stettler where I volunteer once a month.  The other strips have been torn and cut from cottons and lining fabric.


The second, more a landscape, is now under construction  I call it "Nobody Here But Us".  It's inspired by a winter photo of the same stand of aspen that I used for my "Aspen" piece this past summer.   The trees still have more branches than you see here,  but I've chosen to show only their trunks -- it's how they spoke to me against the winter sky.  This piece is currently lying on my cutting table, waiting for the pins. (I don't like using spray baste much.  I like to have the option of changing my mind about the position of something, and I find straight pins give me that flexibility -- even if I'm pricked from time to time as I work!)


The fabric you see:

Looking out my front window, I see that the rather tame snowfall that started this morning has turned to a full-fledged snow-and-blow, and is destined to accumulate to far more than the 1 cm (about 2/3 of an inch) that was forecast.  What better way to spend this day indoors than working on my projects?  Let's see...where shall I begin?
Posted by Margaret at 10:43 am

I especially love "Watching". I find abandoned buildings fascinating and I like your interpretation very much! Great choice of fabrics!

I love your new series. Each image has a story. Want to see more in this series.