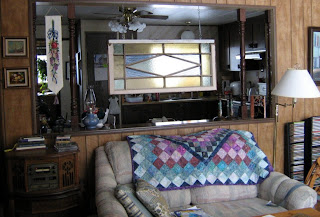 Today I decided to do something completely different: get rid of clutter on the kitchen table (full of City & Guilds stuff -- paints, papers, sketchbooks, pens, pencils), dust (!), finish writiing up my Christmas cards, and hang this:

Yes, it's a window.  Indoors.  I found it in an old house down the street that was being made over this summer.  In the way of small villages, the contractor was the son of one of my neighbours, and he saved it for me -- in exchange for some hardware (nails, an old gas heater) from my garage.  I don't know the date of it, but the window is in the style of the early 1900s, and was actually inserted as a 'topper' above a regular window in the front of the house.  I haven't refinished it; just cleaned it up, and got rid of the dry, crumbling caulking that someone had put on it in later years.  Then I hung it with s-hooks and a bit of chain I bought at my local Home Hardware store in Stettler.  ("Home of the Handyman." Yep, that's me!)  ;-)

I was going to hang the window in the west window of my living room, but its metal frame intimidated me.  I decided that, rather than destroy a drill bit (or worse yet, the entire drill) trying to go through metal, I'd hang it in the pass-through instead.  I think it makes a lovely 'break' between the living room and the kitchen, as well as a conversation piece.  How about you?
Posted by Margaret at 5:13 pm

It's lovely!! What a treasure! I love old stained glass windows. I think it is perfect hanging in the pass-through. I have a space like that in my living room also. Hmmmmm...you've given me ideas! Oh, and what is the kitchen table for if not to hold our sketchbooks, pens,pencils, paints......