Though it's cooling off now... 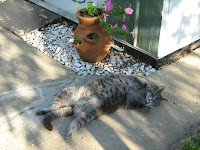 For the past couple of weeks, we've had some lovely, warm summer days that have stretched into gentle, warm evenings -- such that I could read, knit and/or stitch outside until dark, citron candle glowing to keep the bugs away, and a sip of something cool at my elbow. Diesel often enjoyed this time with me, finding relief for his hot, furry body in the cool of the sidewalk near my back shed. He still likes to spend more time outdoors than in, and I don't blame him! 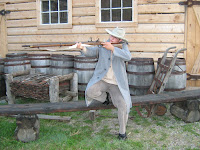 Friday, August 7th, I drove 4 1/2 hours south to Lethbridge, to see my son in his latest role -- the varmint, Fred Kanouse -- in "Siege at Fort Whoop-Up!" This is the third summer he's played a role in the Fort's annual historical fictions -- the people existed but the stories are made up -- and as usual, a great time was had
by all. This year they provided a barbeque buffet as well as the usual wide variety of saloon-fare to quench the palate, but the part the kids liked best was the guns and canon used in the shoot-out. And, in true Western form, in the end, the 'good guys' win. Fred, alas, wasn't one of 'em. Sigh. What's a mama to do? ;-)
Posted by Margaret at 10:12 am