I'm off on a quilting retreat tomorrow, so thought I'd post some Finished Objects -- knits for Christmas gifts -- before I go. I won't name recipients, in case they're lurking... 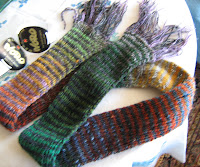 First, a Noro two-ball scarf. I had 1 odd ball of Silk Garden, and 1 of Kureyon, so I decided to try the scarf that smote The Yarn Harlot. Only differences: I used 25 sts to her 39, and I ran out of Kureyon before the Silk Garden, so I cast off and used the remaining SG for a fringe.


Steph's quite right; these can be addictive. Certainly the most enjoyment I've had from 1:1 ribbing in, well, forever. 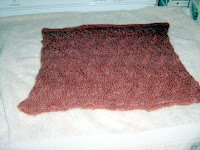 Next, a the smoke ring, shown previously -- now finished. Not enough yarn to create a true wimple (i.e. it's not big enough to use part to cover one's head), but pretty nonetheless. 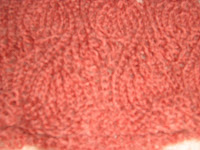 Third, a smoke ring detail, just in case you were curious. This is actually closer to the true colour of the yarn.

Joy Cometh in the Morning arrived a few minutes ago. ohmygosh! It is GORGEOUS. I am THRILLED. Joy cometh with the mailman at 1:45pm! ;)

Thank you so much for donating your beautiful work. Joy now has a new, and hopefully happy, home.

Thank you, thank you!!