Hit me hard late this a.m., when the sun finally came out after a fresh dump of snow. As everything is melting outside, I've been painting my bedroom -- at last. I did one coat on one wall in early December, got dreadfully sick (with a cold, not from the paint!) and haven't touched the project since. It's truly wonderful how fresh a room can look with even one coat of paint -- even if you know that a second coat is really needed. The room had become a dingy peach after about 20 years without a paint job. I could never face it when H. was alive, with all his equipment -- including a hospital bed -- in there. In the next few weeks I'll put on that second coat, and put up new window treatments. Now if I could only figure out just what I want to do with the furniture...

Scarlett-like, I'll think about that tomorrow. Meanwhile, I'm stickin' to my knittin'. I have several things on the needles, including 1 Ancient UFO. 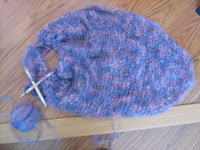 This one is 'Aunt Phebe's Comfort Shawl', which I found in the Sheep-to-Shawl charity archives; I was looking for something a little different. The yarn is a skein of Outback Mohair from Plymouth Yarns -- one of an assorted bunch I've had in my stash for an unknown length of time. It turned out to be exactly what the pattern called for! 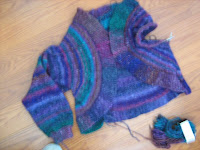 Here is my 'roundtrip' cardi, taken from The Best of Knitter's [Magazine] Jackets for Work and Play, which I am doing in Noro 'Silk Garden' -- again stashed for years. I'm not bothering to match the colours, and just love the way it's going. 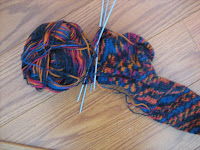 Voila -- the first of a pair of socks for our guild's annual Sock Exchange. I have been given a 'secret sock pal' who had no stipulation as to colour -- just wanted 'superwash' socks knit to her measurements (provided) on 2.0 mm - 2.25 mm needles. I'm using the latter - dpns, to be precise. The yarn is from my sock stash; I am actually rather shocked by how it has knit up so far, and I've started a new pair in a different colourway. I'll finish both, and see which ones I should give away. It's just that the orange is so vivid in this pair, and the stripes spiral down the leg till they puddle at the ankle. It's all very odd... 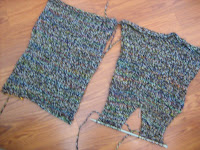 Here's that aged UFO I mentioned. Though the pattern's entitled The Weekend Sweater, it's clearly taken me more than a weekend to make. I found the back and half the front in my UFO box, finished the front, and now have to join the pieces before I can pick up stitches along the shoulder seams and knit the sleeves, top down. I might just start that tonight; this time of year is perfect for that sort of pulli over a shirt and slacks. Oh, and the yarn is 'Dandy' from Gedifra, a mixed-media combination of tape and loosely spun wools etc. 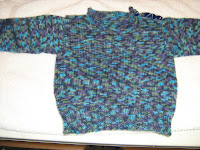 This last piece is (clearly) finished. It was knit for a wee babe who is now just over 2 months' old. Her shower was last weekend, and this was my gift. She's dark-haired and long-legged, and will doubtless fit into the pullover even before 12 months, which was the size I made it. It's from sock yarn, in blue and turquoise, purple and green, with a touch of yellow; the pattern is from KnitPicks (a free download, as I recall), but I knit it in the round instead of in pieces. The finishing of it is what gave me the impetus to work on that UFO, and to make the other items listed, from beginning to end, before going on with other knits.

As evening falls here, I'm going to pick up my needles, put on some jazz, and enjoy.
Posted by Margaret at 2:48 pm