to get ready for Christmas. Being sick for a week -- and feeling the after-effects for almost one more -- has put me behind the 8 ball, for sure! But I am making progress. For example, the Lacy Wave (Wavy Lace?) Socks for my DD have been completed, instead of looking merely like this: 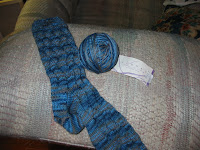 The hat for my DS, courtesy of knitty.com, is finished: 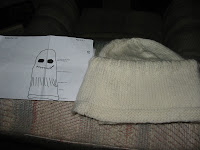 Yarn: Lang Yarns Thema Nuova superwash wool in Colour 115. It's a bit soft and floppy but hey, it's my idea of a knitter's gag gift!

When he opens it, he'll see this: 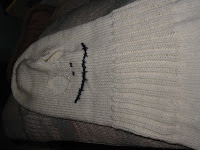 Then there's my Sis...who wanted pillows to match the quilt I made her last year. So far, I've completed the cover for a neck roll/bolster... 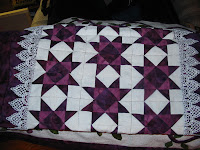 Call me crazy, but I'm also making headway on one of a planned two pillow shams... 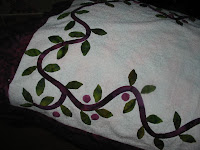 The one knitted gift that had to be sent out of town -- several thousand miles, all the way to a small town in Nova Scotia -- made it! Taken from IK's 2006 Gifts: my interpretation of "Snowman at Midnight", for a baby's first Christmas: 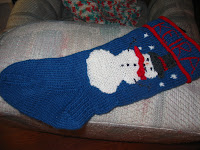 Last but not least -- a photo of my DS, and his girlfriend, J. He's modelling his 'Just Because' cardigan, also from IK's 2006 Gifts issue (wherein it's known as the 'Charcoal Ribbed Cardigan'): 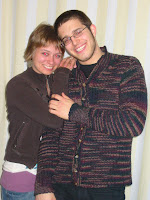 Yes! They are a cute couple. Merry Merry Christmas to you dear virgo sis.